The service was uplifting & the church full. There were two amusing sketches performed by members of the different churches. The hymns too were chosen by members/elders from some of the churches. Roma & I attended from Egerton & one of the hymns was chosen by Roma. ‘The Lord’s my shepherd I’ll not want’. The chorus of the hymn goes;-

‘And I will trust in You alone,

And I will trust in You alone

For Your endless mercy follows me

Your goodness will lead me home.’

During the service representatives of each of 15 churches picked up a pebble with the name of their church & put it into a bowl. The bowl contained water poured in by members of each church to signify their coming together. The pebbles symbolised the old ways & each church received the outline of a dove circled by the names of all the churches in the Partnership. The Dove, a symbol of the Holy Spirit, is a reminder of the need to be open to what God might be saying to us. 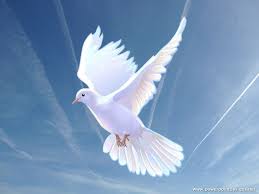 The Revd Dr Adam Scott reminded us of what can happen if we are open to the Spirit. He told how once when he was preparing a sermon he had been unable to write a conclusion to what he had to say. Leaving it open to what God might prompt him to say he arrived at the church.

A young boy in the congregation had brought a lot of his favourite cars to church with him & proceeded to give these out to members of the congregation. Adam Scott says he knew then what his conclusion had to be. He drew attention to the boy who had shared his favourite cars with those around him. Through her tears the boy’s young Mum thanked Adam for including her son in the service in this way. She told him that her son was autistic & could be disruptive in church. She had even been told by some members of the congregation not to come anymore. But now she felt that her son was accepted & valued for who he was. Adam Scott put this down to the prompting of the Spirit, showing God’s love & acceptance of us all no matter what our difficulties & weakness. Thankfully I believe that if we let him, God can use our fears, difficulties & weaknesses in simple ways to show his love & purpose for us all.